A Safe Way to Cut Narrow Trim on a Miter Saw

I wanted to cut narrow (1/2″ wide) trim for a project I am building, and needed to make miter cuts on the pieces for the drawer fronts. To begin with the handsaw, miter box, and I are not friends (plus I seem to have misplaced the miter box) so I had cut the narrow trim with the miter saw. In the beginning, I had a few issues until someone made a stellar suggestion… 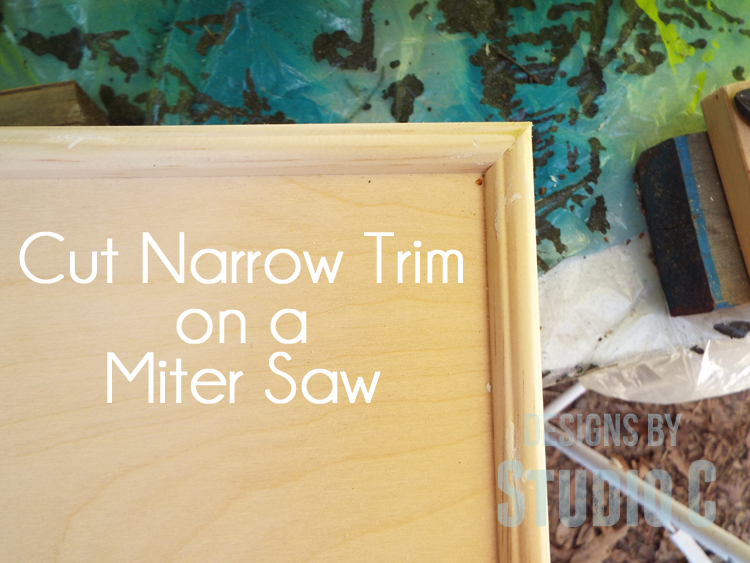 When I had the trim placed against the fence of the miter saw, I had all sorts of problems with “chipping” (for lack of a better term) and the pieces seemed to blow apart. Not to mention that I wasted several feet of trim due to the issues I was having! It was suggested to use a spacer between the fence and the narrow stock so that the bottom part of the blade is doing the cutting not the back part of the blade on the upswing. The upswing is what was causing the chipping and the pieces to blow apart. I had not thought of using a spacer and was so glad someone else did – they saved me tons of frustration and it was a really, really great idea!

Let me show you what I mean… See where the blade is positioned in relation to the narrow stock without using a spacer? It is a much safer cut as there are no pieces of trim flying every which way. For the record, the spacer should also be clamped to the bed of the saw so that it doesn’t slip under the blade due to vibration.

Any other ideas on how to safely cut narrow trim on a miter saw? Leave a comment below!